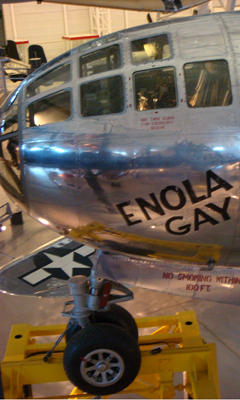 On August 6, 1945, 65 years ago, the Enola Gay, with Col. Paul Tibbets as the pilot, dropped the first atomic bomb on Hiroshima. The event, the bomb, and the aftermath have been heavily debated in my lifetime, but at the time of the event very few questioned the decision.

Thousands of Americans were dying while trying to take back the Pacific Islands. The Japanese were flying kamikaze missions into our ships. It was estimated that at least a million Americans and Japanese could lose their lives if there was an invasion of the Japanese mainland.

I believe in light of the fact that Pearl Harbor was attacked without provocation and that we had been fighting a war on two fronts, the decision by President Harry Truman was the right one. War is tragic. In fact, it is hell. War is a part of life because of sin and Satan. There is such a thing as a “just” war.

During his time in this strategic unit, my dad’s family could not know where he was stationed. Mail was censured and sent from various parts of the country to keep their location and mission top secret.

Several years ago after my dad died, I donated his letters to the University of Mississippi to make sure they were preserved for future generations. Nothing he said was particularly profound (they were letters between he and my mom), but it is so rare to have both the husband’s and wife’s letters during a time of war. I also donated over 100 photographs my dad took in the service, including pictures he took when the Enola Gay landed at Tinian after completing her mission. He was less than 20 feet from Col. Tibbets and the crew as they were recognized for their historic mission.

In fact, I recently found a video taken from the other side of the plane, and I can see my dad raising his camera to take a picture of that moment. It is, as they say, priceless.

When my daughter Hayley was in high school, she wrote a paper about my dad and contacted Col. Tibbets who was still alive. Tibbets replied, “I remember your grandfather. He was an American hero.”

My dad would not have considered himself a hero. He was just doing his job and serving his country. Paul Tibbets never considered himself a hero. In fact, he knew there were those who despised him for what he did, and he requested to be cremated when he died so that a grave would not be decimated by those who despised him. He, like my dad, was simply following orders and doing his job. That’s the difference between following orders and revisionist history.

When the war was over, my dad flew home on the Enola Gay. I still have his orders, now faded and tattered, that contain the names of everyone on Tinian and which planes they were assigned to as they returned home from the war.

A few years ago I went to the Smithsonian to see the Enola Gay. It has finally been given the place of honor it deserves, despite all the criticism and revisionist history. It has been fully restored to assembly line condition. As I stood by it I remembered that, while some people of my generation can say their grandfathers flew on a type of plane, I was overwhelmed to think my dad actually flew home on that historic plane. It caused me to pause and reflect on the freedom I enjoy.

Because of brave men and women of previous generations, we get to enjoy the freedoms of religion, assembly, and speech. Before we criticize our military and our response to those who hate us, let’s remember that Germany and Japan were bent on our destruction in the 1940s. Let’s remember the brave men and women who have sacrificed their lives for the freedoms we often take for granted. 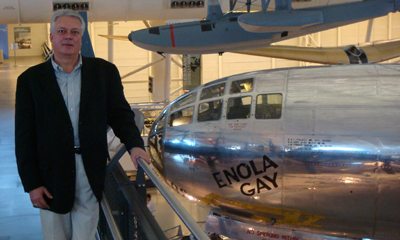 3 thoughts on “Freedom, My Dad, and the Enola Gay”