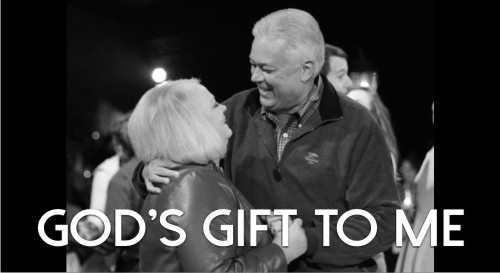 God has given me many gifts in my lifetime. I was adopted into a Christian home. I was raised in the church. I had a youth minister who poured into my life. I’ve been blessed in multiple ways, and I’m grateful for every one of them.

But the greatest gift God has given me, outside of my salvation, is my wife. Terri and I were married at a very young age. She was 19, and I was 21. We were both in college and were very much in love.

Tomorrow, July 31, Terri turns 60. There’s no way I can top what she did for my 60th birthday. She’s the ultimate extra-mile, party planner. She never approaches any holiday or party with a “how little can I do” mentality. She’s all out and all in.

The girls and I are giving her a surprise trip for her 60th birthday. We believe we’ve kept it a secret. She may have some ideas, but I hope she doesn’t really have a clue about when or where. We have worked diligently to pull all this together and give her the trip of a lifetime. If it doesn’t succeed, I may be at church Sunday with a black eye.

Through the years, Terri has done “whatever it takes” to make our family work and to make every house a home. We’ve lived in Mississippi, Missouri, Oklahoma, South Carolina, Georgia, and Texas. She always finds a way to decorate a home and give it a warm touch that amazes me. She may be one of the best decorators on a budget in the world. Our girls always ask for her opinion when they are decorating their homes.

She has always been all in as a mom. She’s not been a smothering mom, but rather an advocate, cheerleader, and supporter. Her goal was to raise two strong, independent women. I think she did a good job. Our girls aren’t whiny or needy. They are confident and have tackled the challenges of life, knowing that their mom was a listening ear and a prayer warrior on their behalf.

Terri hasn’t forced her way into situations with our girls. She didn’t insist on being a camp counselor or teaching them. She let others invest in them. She wanted Erin and Hayley to learn from others as well as learn at home, and she’s gotten involved when she was asked. She’s the rock for her girls.

My mother-in-law says Terri is the rock of their family. She is a stable and stabilizing influence. She will take one for the team when I think she’s taken too much. She exhibits the fruit of the Spirit far more than I do.

Terri has keen spiritual insights. She loves teaching the Bible and counseling ladies in the Word. She’s led our staff wives in a monthly prayer time for nearly fifteen years. I see her spend countless hours preparing her Thursday night Bible Study for the ladies from the community at the Coke Plant in downtown Albany.

She’s been a better wife than I’ve been a husband. She’s patient. She listens. She encourages. She rebukes when needed. She counsels me on matters where I need her perspective. She’s rarely off on her gut instinct on people or situations. She’s got wisdom and discernment. She’s not easily fooled or tricked.

Terri is a quiet woman. She likes time to herself. While she does love to plan parties, she’s not a person who likes public attention. She likes to work behind the scenes, in the shadows. She doesn’t seek recognition or applause. She does what she does “as unto the Lord.”

She put in hundreds of hours working on school plays at Sherwood Christian Academy for nearly ten years. She made costumes, and ultimately directed the shows. She loved seeing the light bulbs come on in the heads of the kids and seeing them learn to “own” a part.

Terri devoted countless hours to Sherwood Pictures. She was in charge of the casting team and also the wardrobe department. She worked long hours as a volunteer for the joy of serving the Lord and the church while we were making Facing the Giants, Fireproof, and Courageous. She has an eye for talent. She was the one who insisted on Robert Amaya for Courageous. She said, “He acts with his eyes.” And he does. She was right, and the “Snake King” was born.

I love having her sitting by me on the front row on Sundays. I try to catch her eye from time to time while I’m preaching. If she’s not looking down taking notes, she’s looking at me. She’s heard me preach thousands of times and still shows up and listens. That blesses me.

She’s 60 years young this week. She’s still cool. She still drives the 2005 Thunderbird I gave her on her 50th birthday. I’ve been blessed to know her since she was in high school. I think I fell for her before she ever gave me a passing thought.

I’m a blessed man because I’m married to one incredible woman. Happy Birthday, Terri. I love doing life with you!