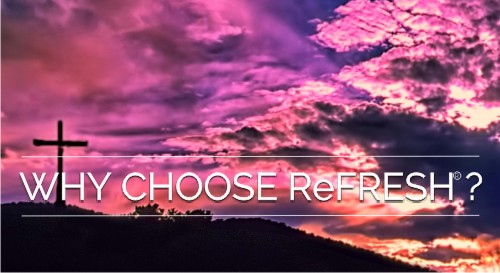 I’m writing to explain why this conference is such a part of my spiritual DNA. We started ReFRESH® in 2001 after the death of Ron Dunn. I had always leaned heavily on Ron during an annual Bible Conference at Sherwood. When he died, I had to go before the Lord and figure out what was next on His agenda…and He birthed in my heart a conference on revival.

Having been saved during the days of the Jesus Movement, I have a taste of what revival is supposed to look like. And having been in ministry now for over forty years, I also have a taste for what promotion, games, gimmicks, methods, and programs can’t accomplish. They can’t produce Holy Spirit power. They can’t convict of sin. They can’t convince your members to walk in the fullness of the Spirit.

We’ve tried all these “things” and we aren’t producing a godly people. We have attenders and members, but all of us would agree the American church is making little impact on the lost world. Only a revived church can impact a lost community. Until we repent and turn back to God, the windows of heaven will not open.

All too often I’ve seen a lack of power, a lack of filling, and the effects of carnality in the typical church. This leads to pastors who are frustrated and resigned to life at a level lower than God intended.

We began ReFRESH® in Albany as a conference for our church. Soon after, we ventured to Pigeon Forge, Tennessee, where our first event hosted 28 people. I was disappointed and almost cancelled any further conferences, but God spoke to my heart to give it three years. On the third year, we turned a corner.

Since that day (we’ve now been in Pigeon Forge over ten years), we’ve ministered to hundreds of pastors. Many have walked into the conference ready to resign or even leave the ministry. Others have rolled into town on four flat tires and left renewed and encouraged. We’ve seen the altars flooded with tears and hands raised in praise to the God who hears us when we cry.

As we’ve expanded the conference, we’ve been to Branson, Missouri, twice. Initially, the conference was sponsored and hosted by the Missouri Baptist Convention’s evangelism department, and over 700 attendees broke recent attendance records for their yearly state event.

For four years, we were honored to support the International Mission Board’s annual stateside staff retreat in Richmond, Virginia, by hosting a mini ReFRESH® Conference for their team. Those years were blessed of the Lord as we invested in the men and women who serve our missionaries around the world.

So here we are 12 years later and taking another step of faith! As of today, we can say that God has used ReFRESH® to impact and influence well over 1,500 pastors and leaders, in addition to the average 1,000 people who attend each session when we host the conference in Albany, Georgia.

This year, we are excited to branch out into New England. The conference will be September 24-25, 2015, at the Omni Parker House Hotel in Boston. You can find more information at NewEngland.ReFRESHconference.org or follow us on Twitter and Facebook.

Our space is limited to 150. Pastors can get a special conference rate (saving over $600, in addition to free resources). Some might think “What do you want from me for all that?” Simply put – your presence and your prayers.

New England has seen great movements of God during the days of the Great Awakenings. The universities of New England were largely established to train ministers and missionaries. What if God did a mighty work – stirred the embers, relit the fire, and infused pastors and leaders with a hunger for the power of the Holy Spirit to fall once again on this area of our nation? We are praying to that end!

We also plan to expand to the West in 2016, and we are specifically meeting with people in Las Vegas about hosting a conference there. Plans should be finalized soon, and updates will be available on our social media platforms as well as the ReFRESH® website.

Through the years, our speakers have varied. Anyone who is invited to speak must understand the concept of revival and awakening and be committed to personal and corporate prayer on an extraordinary level. These men must live out the fullness of the Spirit as essential to the Christian life and ministry. They aren’t chosen for their fame or name, but because they hunger for a great and mighty move of God in our day.

Our speakers have included:

When these men agree to speak, they don’t pop in and out. They don’t sit in a green room waiting to be introduced; they sit in the  conference room waiting to hear from God. They aren’t celebrities; they are servants. These men are prepared to speak any number of times, but they also know God could “hijack” the meeting and none of us could end up speaking but be on our faces before a holy God.

If you’re longing for something more…hungry for God to work…at the end of the road…standing at the corner of frustration and exhaustion…take the time, come apart from the hustle of daily life, and attend ReFRESH ®. We want to pour into your life and get you back on the road toward revival.