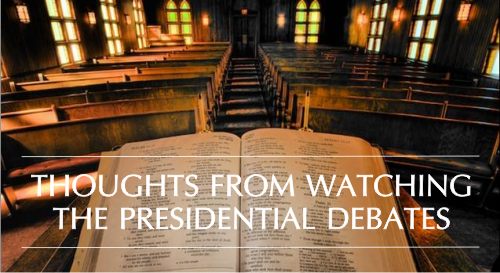 Honestly, it’s hard for me to watch presidential debates. In our past, the debates between Lincoln/Webster and Kennedy/Nixon had a huge impact on the election and the direction of the nation.

Today debates are more mud-slinging than setting a vision. The moderators seem to be trying to tame a lion. The rudeness of constant interruptions shows me someone didn’t get enough lessons on manners when they were growing up. The lack of definitive, specific plans for the economy, terrorism, and global threats is appalling.

While we all know that no one can fully know what they will do until they sit behind that desk, we also know that leaders have visions of where they want to go and how they want to get there.

The current climate is playing to the 43% of Americans who are on some kind of government support. The future will be a picture of what happens when a nation promises everyone they will have something for nothing.

Vance Havner wrote these words in the 1960s:

We tell the world that America is a fairyland of plastics and gadgets and giveaway shows and handouts. If that is all we have to offer, we’re out of bait. We ought to tell the world what it really means to be an American, and the price our forefathers paid to make this the land of the free.

George Washington’s footsore soldiers did not stain the snows of Valley Forge with their blood simply to build a politician’s paradise, nor did Abe Lincoln walk the White House floor night after night to pass away the time.

Every young American and every foreigner coming here to live ought to learn that it cost aplenty to purchase this freedom, and it may cost more to preserve it.

Likewise, when a man joins a church, we should not flatter him – we should challenge him. He ought to know what it means to be a Christian; that it cost God His Son and the Son His life. They paid the top price. We ought to understand that the faith of our fathers was preserved through dungeon and fire and sword, and it is not a status symbol or a Sunday performance. When we cheapen it to make it acceptable to this age, we insult God.

At the same time, we have preachers who won’t speak of the cost of discipleship because they are afraid they’ll run off some converts. The problem with that faulty line of thinking is that it isn’t biblical. Jesus never backed down from stating the terms of following Him. It wasn’t in the fine print.

He demands our life, our love, our all. Any preacher that soft sells that message is like a bad politician. He’ll lie to you to get you to join his religious club, and he will condemn you to hell because you never found the true gospel of the lordship of Christ.

If your preacher isn’t willing to preach the Word – whether it makes the congregation sad, mad, or glad – you better find another preacher. If he isn’t telling you the truth as revealed in the Word of God, he’s lying to you. Get out while you can.