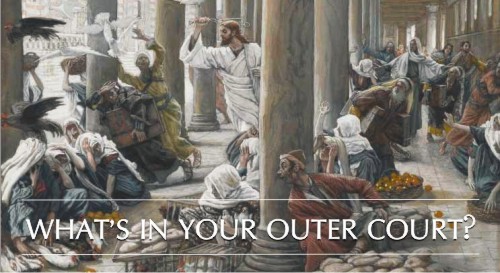 In Matthew 21, we read of Jesus entering the temple and overturning the tables of the money changers. Remember the setting? Jesus is in Jerusalem – He has stepped into the Outer Court and is observing a flea market atmosphere. It’s like a Black Friday sale. The money changers have taken over the area and made a mockery of the purpose of the Outer Court.

When I was serving as a pastor in another state, we had a couple of stressful deacons meetings over the issue of selling products in the foyer. The biblically ignorant brethren took the Matthew passage and wanted to prohibit the sale of books or records in the church foyer. I’ve never seen so much self-righteous ignorance in play in my life. After the deacons voted to no longer allow anything to be sold in the foyer (camp signups, records from artists, books from speakers), I spent a month digging into this matter and discovered the truth of this passage.

Failing to understand context is the reason so many people get off on legalistic tangents. Legalists abound, even today. They have to be confronted with truth. The next deacons meeting I covered much of the ground I’ll cover in this blog, and they reluctantly voted to overturn their decision.

The issues Jesus addressed in Matthew 21 were evangelism and prayer, not the selling of sacrificial animals. It was a matter of greed and the love of money filling the hearts of the money changers.

They claimed their presence was a necessity, but in reality it was a hindrance. While they initially did a good thing, it had become evil. They offered currency exchange for people traveling from other lands. They provided the coinage of the temple and animals for sacrifice.

Historians tell us they were charging as much as two hours of a working man’s wage just to make change for a half shekel. It was extortion. Some have said the High Priest was behind the whole operation, selling booths to the highest bidders.

The end result was there was no reverence for God. G. Campbell Morgan writes, “The outer courts had been turned into a veritable marketplace, with the avowed object of making worship easy by providing sacrifices on the ground. Jesus saw the motive behind the market was the selfishness of those who wished to enrich themselves; and also, that the effect on the worshipers was evil.”

When we lose the “holy other” of worship, worship becomes meaningless, if not evil. When worship is selfish, it ceases to be worship.

Chuck Swindoll writes, “Every Jew over nineteen was required to pay a temple tax. The corruption was not in the system, but in the exorbitant rate these unscrupulous financiers charged. Adding to the corruption was the way the sacrifices were approved. A fee was charged to inspect all the animals brought to the temple for sacrifice. Most of the time, the inspectors found the animal blemished in some way, disqualifying it as a legitimate offering. This forced out of town travelers to purchase an approved animal at the temple, often ten to twenty times the fair market value.”

This practice took place in the Outer Court, the Court of the Gentiles. This was the one place a Gentile could come to meet and worship God in Israel. The problem was, they had set up a market in the one place a person could meet God. The place for Gentiles to pray was overrun by money changers. The spiritual condition of the area was an indication of the spiritual condition of the nation. They had lost all sense of awe and wonder in worship.

Today our bodies are the temple of the Holy Spirit (read 1 Corinthians 6:19, 20). Now the issue is not buildings, but our bodies. Is our body, our lifestyle, a hindrance to people getting to God? Are we a stumbling block? Are we living in a way that desecrates the dwelling place of the Holy Spirit? If someone wanted to know about Jesus, would our lives keep them from getting to Him?

If you are robbing God in tithes and offerings, you are, in your heart, a money changer. Your greed combined with your lack of faith in God’s ability to provide makes you live like the lost world. No reasonable person should expect to have an intimate relationship with someone they are robbing. When you rob a bank, you commit a crime. When you rob God, you sin against your Heavenly Father.

Is your heart a house of prayer? Or have you shoved prayer in the corner? Is the noise and busyness of life drowning out the still small voice of God?

Finally, what’s going on in your Outer Court? Have you cluttered your life with things that hinder you in your walk with God? Has the secondary become primary? Are you justifying anything you should be confessing?

As we approach the Christmas season, are we making room for Christ in our hearts? Or, are we just like the lost world, fighting over items in the mall, looking for a deal, scurrying around trying to find the best gifts, and forgetting the “least of these” we meet along our journey? Have we, the body of Christ, turned Christmas into a “me, mine, I want, I need, I deserve, I must have” time of year? Or, are you part of the Master’s minority who know when to remove the clutter, clear the tables, and breathe in the presence of God?