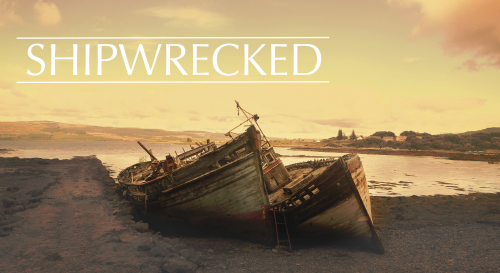 One of the most successful movies of recent times was Titanic. The movie made millions based on the true story of the tragic sinking of a ship that was considered unsinkable.

The World Book Encyclopedia, in an article by Robert L. Scheina, defines a shipwreck as “the accidental destruction or loss of a ship. A ship may be lost by striking land, another ship, or another floating object, such as an iceberg. Fire also causes shipwrecks.” The article goes on to say, “Although ships are now safer, the impact of shipwrecks that do occur is much more severe. This is because present-day ships can carry more cargo than ever before, and many cargoes are hazardous.”

So what does this have to do with anything? As I was thinking about shipwrecks, I thought about the many Christians and churches I’ve observed over the years that are now shipwrecked. Once tall, strong, and proud, they now lay on the bottom of a murky sea called Disaster. Some were run aground by compromise; they didn’t stay the course. Others were sunk by internal explosions. Power groups, personal agendas, and petty opinions caused the church to blow up and sink from sight. Still others capsized because they didn’t pay attention to details or didn’t read the instruction manual.

Whatever the reason, we have countless examples of people who have made a shipwreck of their lives. We see countless churches who were once powerful witnesses that now are nothing more than deteriorating monuments to a once great past.

I know ministers whose lives are shipwrecked and whose ministries are sunk because they compromised morally or ethically. I know men who were once deacons who now are floating dead in the water. I know people who have quit growing in their faith and now their lives are covered with barnacles. They are no longer seaworthy. They do not live lives worthy of the gospel.

Shipwrecks are tragic. Any time you see a life that is sinking into sin and compromise, it grieves you. It is sad to see a family that once sailed through life, now run aground by petty, fleshly desires. No one sets out to wreck their lives, but we see examples of it every day. People who don=t steer their lives down the straight and narrow can one day find their lives lost in the depths of sin.

Churches that fail to keep their eye on the Captain of our Salvation are destined to become churches in name only. They may still meet, but they are rudderless, powerless vessels and an embarrassment to the fleet. Every shipwrecked life or church should be a reminder to all of us that no one is immune or invincible. We are all vulnerable. We must keep our hands on the wheel, follow the course our Captain has laid out for us, and make sure we are anchored in His harbor.