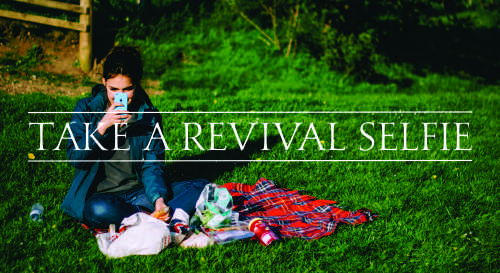 Some of these pictures are funny. Many are increasingly inappropriate. A recent study has shown that this obsession with taking selfies is leading to increased narcissism. Narcissism is a personality disorder that involves a preoccupation with self and how one is perceived by others. It pursues gratification from vanity and the admiration of one’s own physical and intellectual attributes.

One article revealed that a British teenager tried to commit suicide when he couldn’t take the perfect selfie. He was so obsessed with capturing the perfect picture of himself that he spent ten hours a day taking up to 200 selfies. The young man said, “I was constantly in search of taking the perfect selfie and when I realized I couldn’t, I wanted to die. I lost my friends, my education, my health, and almost my life.”

Part of the young man’s treatment included taking away his iPhone for intervals of ten minutes, which increased to thirty minutes then to an hour. In a study of Facebook users ages 18-25, they found that people who use Facebook the most “tend to have more narcissistic or insecure personalities and those with higher narcissism scores were frequently updating statuses, posting pictures of themselves and using quotes or mottos to glorify themselves.”

The problem with posting selfies on social media is that we tend to over or under evaluate our worth based on likes and comments. A casual scroll through Instagram reveals countless individuals holding their phones in the “perfect position” to get the best picture possible.

Maybe it’s time we flipped this switch. Maybe it’s time to really look in the mirror – to see who we really are, what we are like, and what we look like to God.

James writes, “But prove yourselves doers of the word, and not merely hearers who delude themselves. For if anyone is a hearer of the word and not a doer, he is like a man who looks at his natural face in a mirror; for once he has looked at himself and gone away, he has immediately forgotten what kind of person he was. But one who looks intently at the perfect law, the law of liberty, and abides by it, not having become a forgetful hearer but an effectual doer, this man will be blessed in what he does” (1:22-25). James compares the Word to a mirror. A mirror reflects. A mirror reveals. A mirror reminds. God’s Word is a mirror, allowing us to see ourselves and to make the necessary adjustments before we go out into the world.

Revival is a time when we look in the mirror. We see ourselves as God sees us. We let the Word snap a picture of what is really there. When we sit under the Word of God, privately or corporately, it’s constantly exposing the fact that we aren’t perfect. We harbor sin that separates us from God. We have a dirty lens that keeps us from seeing clearly the sin that so easily besets us.

James also warns of self-deception. It’s a dangerous thing to be so self-absorbed that one becomes self-deceived. In every church there are people sitting in pews who are deceiving themselves into thinking they are saved when they are not. They give no evidence of the fruit of the Spirit. They have put their trust baptism, church membership, or rule-keeping. In the hot light of revival, that deception is exposed.

The reason we need revival is because so many believers are fooling themselves concerning their Christian life. They know the right words to say, but they don’t walk the walk. On any given Sunday, churches are full of people who have a selfie that could be captioned, “I am rich, and increased with goods, and have need of nothing” (Revelation 3:17).

If I want to walk in revival, it’s not about likes on my social media; it’s about truth in my spirit. We can miss revival taking a quick selfie…or a casual glance. If we look deep enough, long enough, we will discover that God doesn’t ignore the flaws created by sin. He wants us to deal with them. If you don=t like what you see in the mirror, let God change you.

John Wesley once wrote about a preaching service: “One before me dropped as dead, and presently a second, and a third. Five others sunk down in half an hour, most of whom were in violent agonies” (Wesley’s Journal for June 22, 1739). Warren Wiersbe notes, “Before we consign these people to some psychological limbo, remember how saints in the Bible responded to the true knowledge of their own hearts. Isaiah cried, ‘Woe is me! For I am undone!’ (Isa. 6:5) Peter cried, ‘Depart from me, for I am a sinful man, O Lord!’ (Luke 5:8) Job was the most righteous man on earth in his day, yet he confessed, ‘I abhor myself, and repent in dust and ashes’ (Job 42:6).”

It’s time to look at your selfie. Ask God to let you see what He sees. Deal with it. Make the necessary edits. Repent of any pride that says you don’t need personal revival. Examine your heart and life in light of God’s Word.

If we would just hear and heed, see and correct what God shows us in the Word, we would walk in personal revival. Only the Savior can make you into something you could never be on your own. People practice taking selfies, trying to get them right. It’s time to practice the Word of God which makes us right and keeps us right.