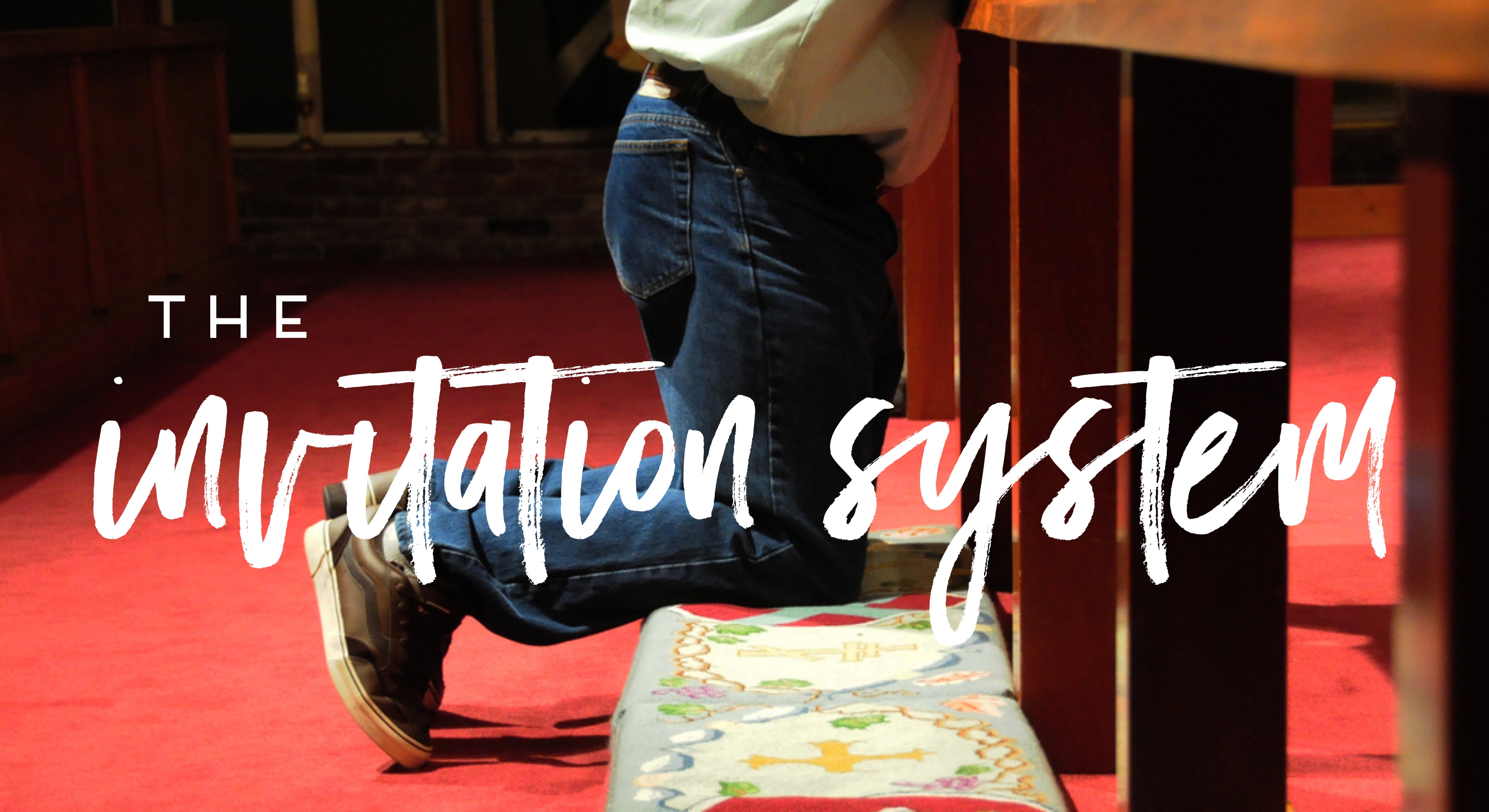 I grew up in a church where they always gave an invitation. It was what you did. You never asked questions. Even if the preacher was talking about tithing, you had to give an invitation for salvation. It was right to do and nobody questioned it. Of course most of the time we sang two verses, no one came forward, and we dismissed. As Vance Havner said, “The church opened the doors and gave up her dead.”

Through the years, the invitation system has been debated and defended. There are good and godly people on both sides of the issue. It’s not a fellowship issue, though it is an important issue to wrestle with. Some Sundays, especially on Sunday nights, I don’t give an invitation. That is, I don’t invite people to come forward. Every message is a call to deeper commitment, but some messages require private meditation, not public response. There are times when I believe the best thing to do at the end of a message is to give the church family time to absorb what’s been said. To be still and know that He is God is not a bad thing.

My denomination has made “walking the aisle,” “coming forward,” or “responding publicly” a part of our tradition. Some say those days are over. I’m not so sure. I don’t think it is mandatory. I’m not one of those who says, “If we haven’t given an invitation, we just haven’t been at church.” That’s more legalism than Scripture.

Many site Rick Warren of Saddleback Valley Community Church as an example of a church that does not practice giving an invitation. Yet, it would be hard to argue with the growth of the church and the number of people they are baptizing and assimilating into the church. I know of churches that baptize hundreds of people a year who don’t give a “come forward” invitation. Of course, in the days of Spurgeon, there was an inquiry room. Spurgeon baptized hundreds every year. Spurgeon was a Calvinist with a heart for souls.  While I’m a strong proponent of the invitation system, I’m a stronger advocate for the “as you go, make disciples” principle. More than inviting people to church, we need to be sharing the gospel as we go and bringing new believers to church with us.

We’ve had people come under conviction in our parking lot on their way home. We’ve led people to Christ standing at the doors as people were exiting. Not everyone feels comfortable coming forward. This should not be seen as a lack of commitment. For some it is just the reality that they are extremely shy. The larger the room, the more self-conscious people become.

This is one reason why Billy Graham had the counselors come forward during the invitation. Seeing someone else respond encourages others who may be hesitant. That is why I pray for people to come to the altar, even if they are praying for others to make decisions. Seeing someone else keeps the bashful person from feeling like they are being singled out or stared at.

In the July 1967 issue of Ecumenical Review, Dr. Graham was quoted as saying, “I am often questioned why I ask people to come forward and make a public commitment. Certainly this act is not necessary for conversion. However, it has a sound psychological and biblical basis. I have had many psychologists and psychiatrists study my methods. They have criticized certain aspects of it, but one aspect that most of them commend is the invitation. Many of them have publically written that this method is psychologically sound. Certainly, when such churches as the Roman Church or the Anglican Church invite people to come forward to receive the bread and wine, this too is an act of public commitment.”  No one could argue or debate the success of Dr. Graham’s ministry. There will be millions in heaven who “came forward” during one of his crusades.

The danger would be for us to mindlessly take the revival tradition of the 19th century and make it a law or a tradition that is worshiped. There’s more than one way to get saved. Some Jesus spoke to privately, some He called out publically. Jesus knew people. We need to know people if we want to reach people.

In the New Testament, their profession of faith was their baptism. This is true in many countries and especially countries where professing Christ is to be cut off from family and friends, or to risk your life. Baptism is the “sign” that someone is serious about their commitment. Anyone can walk an aisle and make a decision. Understanding baptism takes it to a higher and deeper level.

Alan Day, the late Pastor of First Baptist Edmond, Oklahoma, was a pastor friend. He was interviewed on this subject in 1995: “We don’t make that the ultimate issue. I don’t think it’s biblical to make salvation contingent on whether you’re content to stand before 1,500 people or not. That may be intimidating to some. And although it’s traditional, it’s also fairly recent in terms of 2,000 years of church history. We’re talking about probably the last 150 years that invitations have been used in this way.”

Dr. Roy Fish, Southwestern Seminary Professor of Evangelism, said, “I don’t see anything wrong with winning people to Jesus in their homes and presenting them to the church in the baptistery.” Roy probably influenced more young preachers to have a heart for evangelism than any preacher or professor in the 20th century.

Dr. Fish wrote an excellent book some years ago on how to give an invitation. It’s a great book, probably no longer in print and that’s unfortunate. He lists five kinds of invitations:

Whatever your position on the subject, one thing is clear. We are called to present Christ as the only hope for man. How we get people to have a face-to-face encounter with the living Lord may be open to debate, but the need to do so is not.