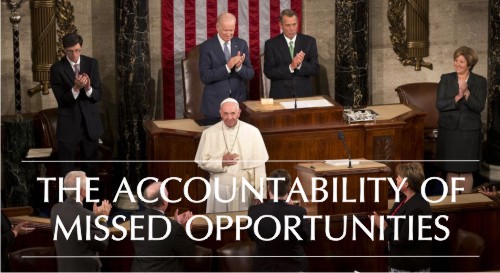 How many times have I missed an opportunity to share my faith? How many airplane seat-mates, how many waitresses, how many hotel clerks have I encountered along the way and not taken the command to “go into all the world and preach the gospel” seriously? The number, if I added it up, would be staggering and convicting.

A few years ago I was invited to pray over Congress at the beginning of a session, and I had to submit my prayer for approval ahead of time. It was approved, and in that prayer I specifically talked about Jesus as Lord. I didn’t want my one time on C-SPAN to be lacking a witness. Over the years, I’ve been interviewed by countless radio, TV, and print journalists about our movies or one of my books. I’ve consciously tried to present the hope of Jesus Christ in all of these opportunities.

Recently the American public swarmed like flies to see the Pope. In like manner to all the men who have served before him, the Pope attracts massive crowds wherever he goes. When he was invited to speak to Congress, I raised my eyebrows and thought of the incredible hypocrisy of that invitation.

First of all, have we ever, or at least in recent history, invited an evangelical to speak before a joint session of Congress? I doubt it.

Secondly, since the Vatican is recognized as a “state”, isn’t this a violation of the liberal cry for separation of church and state? If not, then why are liberals removing signs and statues that bear the Ten Commandments? Why are nativity scenes forbidden? The Catholic Church believes in these, don’t they? They believe in a virgin birth, don’t they? Therefore, to have the head of a church speak to Congress is a violation of everything liberals say they believe. So where was the outcry? Why weren’t there boycotts and injunctions filed?

I think I know why. No one was threatened by the thought of Jesus Christ during the Pope’s message. He denied Christ because He didn’t proclaim Christ. That may sound harsh, but it’s biblically true. The reality is that the Pope is more concerned about immigration and the climate than the Son of God who called people to Himself and told us to share His message.

The message of Jesus wasn’t, “We should take care of the environment; the Sea of Galilee is getting polluted…” He didn’t go to Samaria and say, “We need to be sensitive to those who are here illegally.” He walked this earth to preach forgiveness, deliverance, and hope to outcasts and sinners.

But unfortunately, there was none of that in the Pope’s message before Congress. He met with a Communist leader one day and with the leaders of a democracy a few days later and “preached” the same message.

Where was Jesus? If this man speaks for God, where was the message from God – the message of heaven and hell, hope and forgiveness, grace for sinners? Where was the call to the cross? It’s one thing to wear a cross around your neck; it’s another thing to preach Christ crucified.

Here’s a transcript of the Pope’s message to congress:

I am most grateful for your invitation to address this Joint Session of Congress in “the land of the free and the home of the brave”. I would like to think that the reason for this is that I too am a son of this great continent, from which we have all received so much and toward which we share a common responsibility.

Each son or daughter of a given country has a mission, a personal and social responsibility. Your own responsibility as members of Congress is to enable this country, by your legislative activity, to grow as a nation. You are the face of its people, their representatives. You are called to defend and preserve the dignity of your fellow citizens in the tireless and demanding pursuit of the common good, for this is the chief aim of all politics. A political society endures when it seeks, as a vocation, to satisfy common needs by stimulating the growth of all its members, especially those in situations of greater vulnerability or risk. Legislative activity is always based on care for the people. To this you have been invited, called and convened by those who elected you.

Yours is a work which makes me reflect in two ways on the figure of Moses. On the one hand, the patriarch and lawgiver of the people of Israel symbolizes the need of peoples to keep alive their sense of unity by means of just legislation. On the other, the figure of Moses leads us directly to God and thus to the transcendent dignity of the human being. Moses provides us with a good synthesis of your work: you are asked to protect, by means of the law, the image and likeness fashioned by God on every human face.

Today I would like not only to address you, but through you the entire people of the United States. Here, together with their representatives, I would like to take this opportunity to dialogue with the many thousands of men and women who strive each day to do an honest day’s work, to bring home their daily bread, to save money and – one step at a time – to build a better life for their families. These are men and women who are not concerned simply with paying their taxes, but in their own quiet way sustain the life of society. They generate solidarity by their actions, and they create organizations which offer a helping hand to those most in need.

So, read it again. In reality, that speech could have been given by a humanist or a socialist. It’s already been given by socialist candidates in this election cycle. These are the talking points of lost men trying to be good enough to get to heaven.

He mentioned Moses, but not Jesus. He spoke of the law, but nothing about the grace we need from God as sinners. Yes, he addressed lawgivers, but the New Testament church has the law, the prophets, and the Son of God. The law has no meaning apart from the holiness of God. The law condemns; it reveals our need of Christ.

Of course, now that we’ve allowed the Pope, I’m sure we’ll one day soon allow a Muslim cleric to speak. But you can hold your breath until Jesus comes for an invitation to an evangelical who believes the inerrant Word of God to stand before Congress and call them to repentance. That requires a prophet…and America is a non-prophet society.