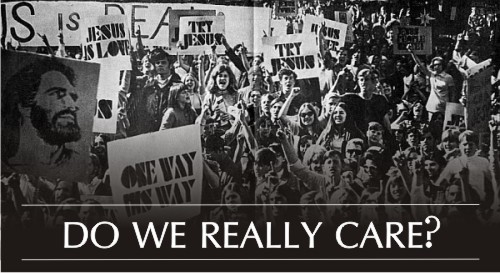 My heart breaks. We’ve lost the culture. If it’s not completely lost, it’s on the verge of extinction. While I meet people who constantly express a concern for this generation of children, teens, and young adults, I find them unwilling to do whatever it takes to reach them. We are concerned, but are we concerned enough to act? Will we sit back and watch this generation flounder and give themselves to the idols of this world, or will we draw a line in the sand?

This generation has no context of what it means to have a biblical worldview, as 88-92% of teens are lost and unchurched. Students know more about gangs than the Gospels, hate crimes than Christ, abortion than the abundant life, and fear than forgiveness. They have no hope in our nation, their future, the economy, employment, or a meaningful relationship. They resort to the gods of this world in hopes of filling the void of their empty hearts.

They look around and see violence, anarchy, riots, gangs, mass murders, school shootings, racism, protests, and countless tragedies. They are numbed by the news and clueless as to the full extent of what will happen if things don’t change.

This is nothing new. In many ways, today is no different than the days when I was saved. I came to Christ in the days of the Jesus Movement when the biggest issues we faced were the Civil Rights Movement, the Kent State shooting, riots at the Democratic National Convention, the escalation of the Vietnam War, and a church asleep at the wheel.

But in that moment of hopelessness and despair, God showed up. God moved in and the Jesus Movement was birthed in the most unlikely of places. It rippled through the drug culture, strip clubs, bars, and sit-ins. Hundreds of thousands of teenagers and young adults came to Christ. In many ways, the movement possibly averted total anarchy by offering hope to the hopeless. The impact was profound and eternal, and the effects are still seen today. But we have a generation that has once again lost their way. NOW is the time to act. NOW is the time to pray. NOW is the time to engage.

The signature event of that movement was Explo ’72 where nearly 100,000 believers gathered in the Cotton Bowl in Dallas, Texas, to proclaim there was “One Way” to God, through Jesus Christ. It revolutionized my generation. Dozens of books were written about the movement. Sadly, it was the last great revival wind to blow in our land. If we don’t act now, pray now, and engage this generation now, it may be the last wind of revival to blow…period.

As I sit here today, I’m thinking about how close we could be to another move of God. In recent weeks, the movie War Room has exploded on movie screens and people have announced a change in the way they think about prayer. Prayer closets have been created, and churches have re- launched their prayer ministries. Prayer should always lead to action. Prayer that lacks feet is merely talking to ourselves. Faith without works is dead. We must pray for this generation, but we must also act. For prayer to be biblical and powerful, it needs to rise to the level of intercession for the things that are on the heart of God – for the people who live in the world that He came to save.

Right now, we have an opportunity to impact this generation. Most of them, especially the unchurched, are not going to spend money to see a movie on prayer. Whether we like it or not, that’s the reality. For many, it’s not even on their radar. That movie is geared to the Christian base, and the base desperately needs to be energized. God has used War Room in powerful ways.

Now, I am asking the energized base to do something else. Let’s not stay on first base – let’s get moving. I’m calling for that base to walk in a way that reflects a heart pleading to God in prayer on behalf of this nation and this generation.

As I write, the movie Woodlawn is playing in theaters nationwide. The film is a true story of how God showed up on a high school campus in Birmingham, Alabama, in 1973 when 44 out of 48 football players came to Christ in one Fellowship of Christian Athletes meeting. It was a move of God directly tied to the Jesus Movement that impacted not just the team, but the school and the city.

The movie gives this generation a picture of what can happen when God shows up. This generation has never seen a real revival. They need to see one. They need one now. (Click here for a clip with scenes from Woodlawn that pictures what happens when Jesus shows up.)

Will we seize this day? Will we act this week? Right now? The movie is a clear presentation of the gospel and its power to change lives, resolve racism, heal hurts, and renew hope in a generation. But if they don’t see the movie, we will have missed a potential divine moment.

We have an opportunity as pastors, Christian businesspeople, youth pastors, parents, and para-church leaders to expose them to the gospel and to the results of revival. Is your church engaged? Pastor, are you engaged? It’s one thing to say you’d like to see more Christian movies and entertainment – it’s another thing to spend some of your influence and change to see that your church is engaged in reaching this generation.

Let’s not complain that our world is going to hell and then, when given a great tool to change lives, act sheepishly or fail to act at all. It is imperative we act now. The movie industry is a cruel beast. If theaters aren’t packed, they will pull the movie from theaters. The industry judges, not by changed lives, but by ticket sales. As of today, we’ve seen 2,000 students come to Christ while seeing Woodlawn. I think THAT number should get our attention and arouse us to action.

It’s imperative that we act now. There are movements of God happening all across our land. Woodlawn could be a catalyst, a tool, for revival in this generation…if we engage them.

We have a banner hanging at Sherwood that says, “Whoever Wants the Next Generation the Most Will Get Them.” While I pastor a church in a community once deemed the fourth poorest city in America, we’ve worked with the local FCA to purchase over 3,000 tickets for students in our community.

As a former youth pastor, and now as a pastor, I weep over what is happening to young people in our nation. I want to be a catalyst for change. Will you join me? Will you prioritize this? Today? Now?

I beg you, for the sake of this generation, act now. Don’t wait. Get your church engaged in touching a generation for Christ. Get the students in your community into the theater to hear the gospel.

One reason the Jesus Movement didn’t last was because the church wasn’t ready for a bunch of former hippies and drug addicts to walk through their doors. We cannot let that happen again. We must work while there is day. We must share while there is time. We must engage this generation while the doors are open. If we really care, we will act now.

If you’d like more information about purchasing group tickets, click here. I beg you, take a big step of faith. Talk it up. Post it on social media (#WoodlawnMovie). Tell the stories of what God is doing in your midst. In the first weekend, over 900 students came to Christ in theaters across America. What if . . . this week hundreds of students came to Christ because you made it possible for them to see a football movie filled with the gospel?