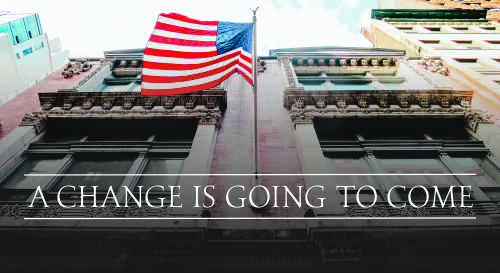 This is a year of change. There will be a new president and perhaps a new party in the White House beginning in 2017. Tomorrow we will elect a new leader of the free world. Whether he or she is able to do the job is yet to be seen. Regardless of the outcome, Washington is already gearing up for a change.

But how much will really change. The wheels of government grind slowly. Every politician I can remember has promised change, but few have actually brought it. At the end of the day, most governors, senators, and presidents have failed to fulfill many of their promises to bring fresh air, a fresh face, and a fresh perspective to the situation. Normally we get the same old stuff with just the pictures changing on the walls.

The current candidates for the White House are promising change. I was recently scanning a 2008 Newsweek article. The author pointed out that every president in recent memory has promised change. Think about it.

The writers of the Newsweek article noted, “…change rarely has much to do with campaign promises, and everything to do with unexpected events, from Pearl Harbor to 9/11.” I have little hope of change coming through politics. I have friends who are snorting and blowing off about their candidates on both sides of the aisle. The reality is that we’ve put our faith in the person who will sit in the White House more than we have the One who sits on the throne of glory.

Yes, I know what’s at stake. No, I will not get in a political debate with you. Yes, I understand about potential Supreme Court justices and on and on. But, I must remind you the so-called conservatives have voted for same sex marriage. The foundations are being destroyed, and both parties need to repent.

I refuse to lose the high ground of being gospel-centered. I refuse to turn my pulpit over to influence people to vote. In our history, evangelicals pushed to get Thomas Jefferson elected because they felt he was either the Anti-Christ or the prophet of the Anti-Christ and if they helped get him elected it would hasten the return of Christ. It is thought by some historians that this influenced 2% of the vote, which gave the election to Jefferson. Insane? Yes. Surprising? No, not based on the rhetoric of some pastors today.

Again, I know how I will vote, but I will not give my pulpit or my energies to getting someone elected. I will not use my Facebook page and social media to try to get someone in any office who will most likely care nothing about the Judeo-Christian ethic. I won’t answer comments on this blog. I won’t return phone calls about this. I’ll simply ask you to ponder something…

How is it that the church was able to influence, impact, and revolutionize the Roman Empire that was persecuting the church and killing the saints? They planted churches, established missions, and proclaimed the gospel as their first and foremost passion and purpose in life. In reality, Paul told us to pray for those in authority (I’m assuming he also meant Nero, who would ultimately have Paul killed). But we curse those in authority because it’s easier than praying for them.

If we were about the business of fulfilling the Great Commission, this nation wouldn’t be in the pathetic state it’s in today. We’ve settled for a lesser message. We’ve sought to influence politics and forgotten there is a sovereign God in glory who may be intent on judging America no matter what we do. We better get busy sharing the gospel – that’s our calling.

Why have so many religious leaders bought into this? Because we lack discernment that people use us and then ignore us. They ask for our votes, then establish laws that hurt the church and family. We’ve forgotten to keep the main thing, the main thing. The change we need is not in the White House, it’s in the church house. Revival begins with a repentant church, not an election. When God is given His rightful place, no king, emperor, or politician can stop it.

I choose to focus on Jesus first. All else is secondary. Anything less is, in some form or another, idolatry. Idolatry is making anything or anyone other than God the preeminent thought in your mind and in your speaking. In 6:16 we read, “Thus says the LORD, ‘Stand by the ways and see and ask for the ancient paths, where the good way is, and walk in it; and you will find rest for your souls.’” The Message paraphrases it this way: “Go stand at the crossroads and look around. Ask for directions to the old road, the tried and true road. Then take it. Discover the right route for your souls.”

What America needs is also what the church needs: a prophet for our time that will call us back to what matters. If you get your people praying, they will change what needs to be changed. If you try to convince them in your flesh or with an impressive brochure or power point, they might point you toward the door. It’s still true – “ALL is vain unless the Spirit of the Holy One comes down.”