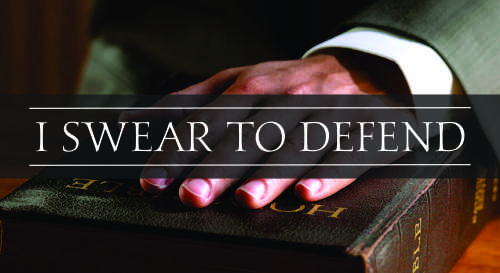 When a president is sworn into office, that person lays their hand on a Bible and swears to protect and defend the Constitution of the United States of America and ends by saying, “So help me God.” Leadership that does not acknowledge the need for God’s help is foolish. Leaders that say they need the help of God but never seek it are liars.

At the end of the day, the sad history of America is that often politics, party preferences, lobbyists, desire for a personal legacy, and carnal agendas define a president more than the Constitution or the Bible. We have painful illustrations of immorality in the White House, secret tapes, under-the-table deals, and unwise decisions among both parties. We need a leader who will support and defend the Constitution amid a rising tide of those who think it’s just a fluid piece of paper that can be changed according to the whim of the times. That was not the vision of the founding fathers.

At the same time, when a person is ordained to be a minister of the gospel, they are expected to support and defend the Word of God. They are to preach it as the inerrant, infallible, inspired Word of God. There is nothing to add to the complete revelation of the whole counsel of God. All we need to know about the pursuit of holiness and godliness, salvation, grace, forgiveness, mercy, and God’s love is contained in the 66 books of the Bible.

Unfortunately, far too many stand in pulpits today in a compromised position. They water down the Word. They ignore certain texts because they make people uncomfortable. They don’t exegete Scripture, but talk around it because they know the truth is black and white not dingy grey.

An unseen hand has been laid upon the man truly called by God. It’s far more than the ordination council; it’s bigger than life, a calling that cannot be denied. If there is to be Holy Spirit fire in the hearts of the people, there must be fire in the pulpit. God doesn’t send His messenger into the pulpit with an empty envelope.

The pastor is to preach the Word without apology and should never stutter or back down from the clear teaching of God’s Word. Nonetheless, many pulpits are filled by men who either aren’t called to ministry and see it as a profession rather than a calling, or by men who have caved into fear and compromise. The authority of the Bible sets us free to speak the truth. God’s Word is its own best argument. The 21st-century church is always looking for new methods of church growth while God is looking for godly men who will preach the truth without apology. You simply can’t grow a healthy church with an anemic preacher.

How can a preacher fail to preach the Word? He can cave to the fear of man or the fear of losing his job (which in reality means your income is more important than your integrity). A man called of God to preach the Word of God, in the power of God, to the people of God cannot be a people pleaser. This has nothing to do with giftedness or personality. It has everything to do with obedience. The Word will make some people mad and others glad.

Richard Baxter wrote, “It is no easy matter to speak so plain that the ignorant may understand us, so seriously that the deadliest of hearts may feel us and so convincingly that contradictory cavaliers may be silenced.” We preach for the salvation of the lost and the sanctification of the saved.

Others may compromise the Word because they don’t want to offend the person who gives them time at their summer condo or a nice Christmas gift. For example, some avoid preaching on money and giving because they don’t want to offend. Others just preach on things the church can feel comfortable with. There are preachers who never challenge their people to evangelism and missions. They forget the Bible is relevant in all areas of life. The Spirit uses the Word to convict people of compromise and sin. If we don’t preach it we must ask, “How will they hear without a preacher?” Vance Havner wrote, “Better to be a free preacher who can walk into any pulpit responsible only to God, immune to praise or blame, than a ventriloquist’s dummy.” Jesus offended the most religious people of his day. The cross is offensive. The blood is offensive. If people don’t like it, they may be church members, but like the Pharisees they are lost. Preach to them like they are lost. Stop trying to convince them of something in the Bible when they don’t know the God of the Bible.

John Blanchard wrote, “Men do not reject the Bible because they find faults in it, but because it finds fault in them.” Martin Luther wrote, “God’s Word is such perfect truth and righteousness that it needs no patching or repair; in its course it makes a perfectly straight line, without any bends in any direction.” My mentor Vance Havner often said, “The task of the preacher is to comfort the afflicted and afflict the comfortable.”

If we are preachers of the Word, we solemnly swear to defend the Word of God. It’s simple. It was written for people at all levels of life and learning. Too often our preaching isn’t practical. That’s when we are more concerned about impressing the congregation with our Greek and Hebrew than we are in giving them the Word for life and living. If we shoot over the heads of our congregation, we only prove that we don’t know how to shoot. If we think we are feeding giraffes instead of sheep, it means we don’t know what a shepherd does or how he does it. Preaching is not about gaining intellectual facts as much as it is about a changed heart. John Flavel wrote, “The excellency of a sermon lies in the plainest discoveries and liveliest applications of Jesus Christ.”

One final word. I believe in the public invitation. I realize that’s not a requirement for preaching, but why preach if you aren’t calling for a decision? Preaching the Word without apology should have an immediate effect. We will miss the mark and waste the congregation’s time if we preach with the idea that they can do something about it at a later time.

Pastors need to toughen up. Vance Havner said, “A preacher should have the mind of a scholar, the heart of a child, and the hide of rhinoceros. His biggest problem is how to toughen his hide without hardening his heart.” Through the years people have left our church because they didn’t like the preaching. Some didn’t want to hear about tithing. Some refused to change their racist attitudes. Others didn’t like the music. A few left when I first came because I didn’t preach from the KJV. The truth is: you don’t miss anyone who ignores, rejects, or runs from truth. A preacher of truth doesn’t preach in a fog; he clears the fog with the breath of God on his lips.

D. Martyn Lloyd-Jones wrote, “I can forgive the preacher almost anything if he gives me a sense of God.”

Give them Jesus when you preach the Word!