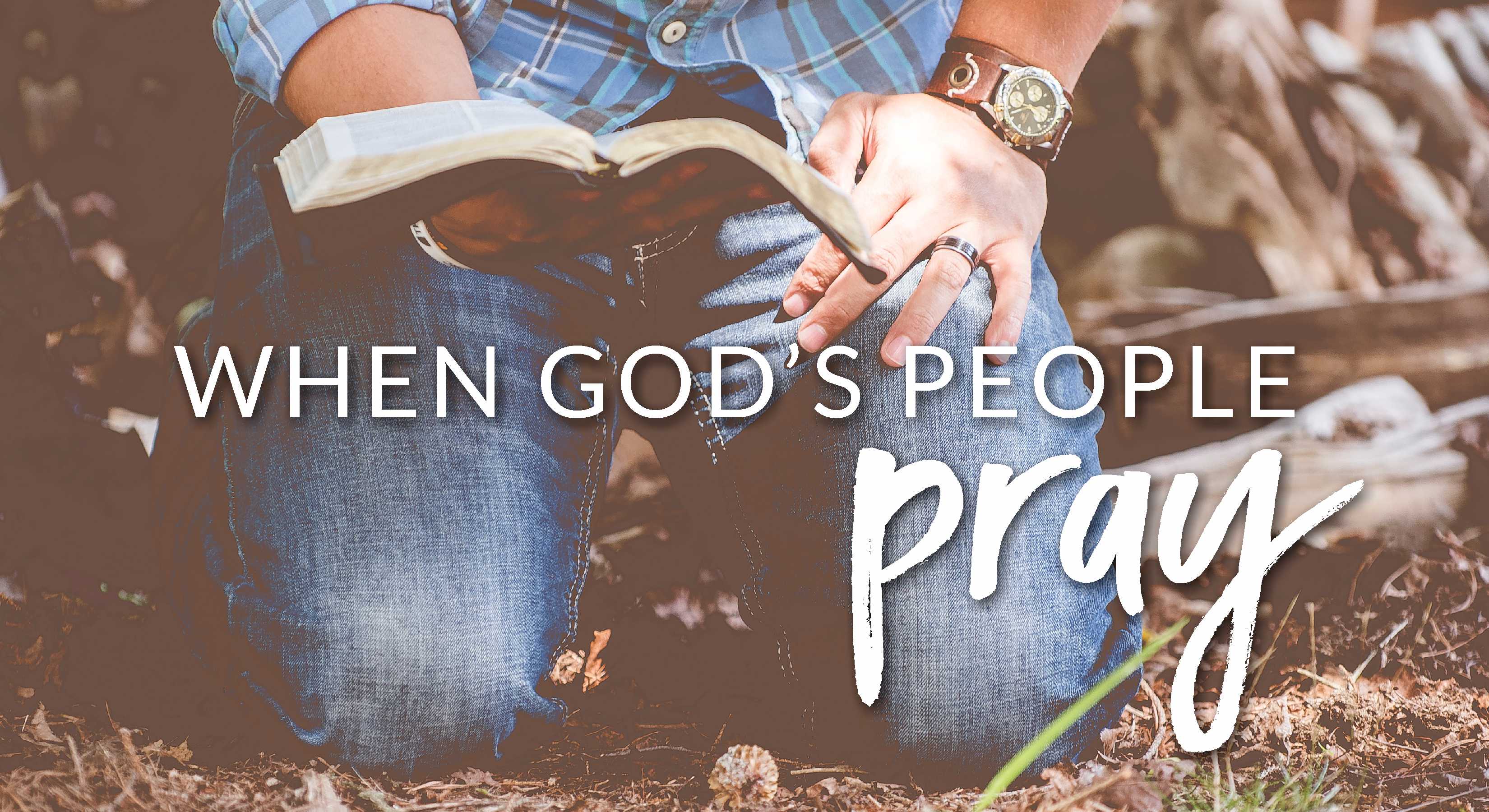 I remember the first time I heard Wayne Watson’s song by that title. I sometimes find myself humming or singing it… “When God’s people pray, there is hope restored, there is sin forgiven…”

It’s not that prayer changes things; it changes me. Prayer is not the method we’ve been given for twisting the arm of God. It is not given to convince God to see things from our viewpoint. Prayer is a privilege given to learn and embrace the mind of God.

Behind the scenes of every revival has been a prayer movement. Not a panel discussion. Not dialogue, but prayer. Behind every move of God in a local church, you’ll find someone, some group, some remnant praying. I’ve almost been able to chart the ebb and flow of God’s blessings on this local fellowship by our prayer ministry. Since those days in the early 1990s when Don Miller challenged us to be a praying church, we’ve not been able to move forward without being on our knees.

We have walked through every crisis, fear, and opportunity through prayer. I don’t know that we’ve ever had a deacon’s meeting when we didn’t talk about things that needed to be prayed over. I don’t think we’ve had a Sunday without the Pastor’s Prayer Partners meeting to pray.

As we’ve invested significant money in two massive building programs, we’ve prayed. We didn’t get to where we are by architects alone, but by appealing to the architect of glory to give us wisdom. We would not be where we are today if it were not for prayer.

Any “success” we might have enjoyed has been the result of prayer. Every step of Sherwood Pictures was bathed in prayer, from writing the stories to casting to editing. It is the element the world cannot explain or even understand. God has done exceedingly and abundantly beyond what we ever hoped or imagined.

The fact that we’ve walked through the worship “wars” without having a war is, I believe, the result of prayer. We had to make some changes in our worship without forsaking our heritage. Some did not like it, some left, some did not understand, but because it was prayerfully done instead of forced, the change has been blessed.

The fact that we’ve changed from a 99.5% white church to a church of 20 nations, spanning socio-economic lines with ministries touching our region and the world is the result of a praying people. You don’t make significant changes by bullying; you make them in a prayer environment.The examples are too numerous to mention, but you get the point. The prayer tower that stands front and center of our Worship Center is not our 900-feet-tall Jesus. It’s a symbol of what we stand for. It is our power source. It is a constant reminder that prayer is the key to what we do.

The examples are too numerous to mention, but you get the point. The prayer tower that stands front and center of our Worship Center is not our 900-feet-tall Jesus. It’s a symbol of what we stand for. It is our power source. It is a constant reminder that prayer is the key to what we do.

The greatest failure of the three – Peter, James, and John – is summarized in the words, “Could you not watch and pray with me one hour?” Prayer is a spiritual ingredient that this church and no Christian can do without.

I was reading Leonard Ravenhill’s Treasury of Prayer, which is taken from the writings of E. M. Bounds. Read these words carefully, “It may be said with emphasis that no lazy saint prays. Can there be a lazy saint? Can there be a prayer-less saint? Does not slack praying cut short sainthood’s crown and kingdom? Can there be a cowardly soldier? Can there be a saintly hypocrite? Can there be virtuous vice? It is only when these impossibilities are brought into being that we then can find a prayerless saint. He who is too busy to pray will be too busy to live a holy life. Other duties become pressing and absorb in and crowd out prayer. Choked to death, would be the coroner’s verdict in many cases of dead praying, if an inquest could be secured on this dire, spiritual calamity. One of Satan’s wiliest tricks is to destroy the best by the good. Business and other duties are good, but we are so filled with these that they crowd out and destroy the best. Prayer holds the citadel for God, and if Satan can by any means weaken prayer, he is a gainer so far, and when prayer is dead the citadel is taken.”

It’s easy for any and all of us to get drawn into secondary issues that can’t be fixed apart from prayer and revival. God can do more in a moment than we can do in a lifetime. Let us resolve to be, more than ever, a praying people. Praying is not our duty, it is a necessity. It’s not optional on our spiritual checklist. The truth is, I must pray and I must be prayed for.

Let me again quote from Ravenhill’s book, “That the true apostolic preacher must have the prayers of other good people to give to his ministry its full quota of success, Paul is the pre-eminent example. He asks, he covets, he pleads in an impassioned way for the help of all God’s saints. He knew that in the spiritual realm, as elsewhere, in union there is strength; that the concentration and aggregation of faith, desire, and prayer increased the volume of spiritual force until it became overwhelming and irresistible in its power. Units of prayer combined, like drops of water, make an ocean that defies resistance.”

When God’s people pray, things happen. There are some things God will not do apart from prayer. Will you join me? Can we pray in unity that God will move in power and that the church will stop retreating and start doing battle on her knees?